This app has been removed from the Google Play Store. See full announcement here.

I’m a bit of a Google Reader addict. I wanted something on my Android device that could summarize the status of my account without having to load the browser and log in or refresh. So I decided to create an app consisting of Google Reader Widgets. The app contains four widget sizes: small, medium, large and extra large.

There are two versions of my application in the Google Play Store. The free version which is ad supported and the Pro version.
Both versions can be found by searching for “reader widget” in the Play Store on any Android phone or by scanning these QR codes: 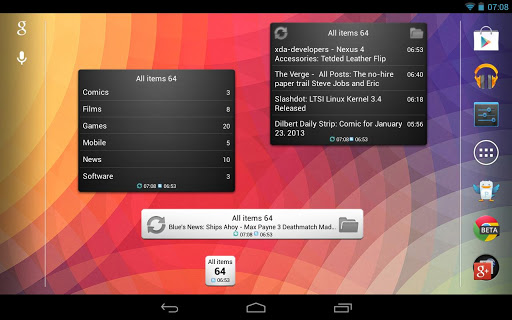 The medium widget (bottom left) is 2×2 cells shows the unread counts of all tags. Alternatively it can be configured to show the feed unread counts for a particular tag. Both the last refresh time and latest unread item time are displayed at the bottom.

The large version (center) is 4×1 cells and displays the headlines of unread items at 5 second intervals. It has a refresh button on the left to update the widget information. It has another button on the right which can be configured to launch the webview, a Reader app or tag list. Tapping on the text area shows a list of all the headlines. If a headline is tapped on it expands to show the article summary in text.

The large widget can be configured to show the unread headlines for a particular tag but also for a particular feed. Both the last refresh time and latest unread item time are displayed at the bottom.

The XL widget is a resizable one for Honeycomb tablets. It displays the headlines and post times with the newest ones at the top in a scrolling list. Tapping on the headline launches a new browser tab for that story. It is just as configurable as the other widgets.

Limitations of both versions

[…] look at a couple more apps: little ol’ Reader Widget Small, and its big brother, Reader Widget Pro. Both are widgets that provide basic info about your Google […]